Scientific Report on the destruction of Tall el-Hammam (biblical Sodom)

This massive paper (some 64 pages), written by over 20 contributing authors (archaeologists and scientists), provides detailed forensic evidence that a cosmic airburst (not unlike the Tunguska airburst in Russia in 1908) obliterated Tall el-Hammam, the largest city in the Dead Sea area during the time of Abraham, (ca. C14 dating 1700 +/- 50 BCE).

During the early seasons (2005-2021) of the Tall el-Hammam Excavation Project (TeHEP), we discovered an anomalous “burn layer” just below the modern surface of the artifact-filled, half-mile long cultural mound and suspected it might provide hard evidence for the biblical story of the destruction of Sodom.

In 2014, the Comet Research Group (CRG) research team was invited to assist in the examination of material evidence from within the destruction layer of Tall el-Hammam. The CRG has authored more than 40 major journal publications defining another cosmic catastrophe at the close of the last ice age 13,000 years ago, the so-called Younger Dryas Impact. They also developed most of the protocols necessary to conduct this investigation.

Far from being apocryphal fiction, the biblical account of destruction from the sky turned out to be supported by numerous lines of geochemical and material evidence buried below the surface of the ruin-mound. A carbon-and-ash-rich destruction layer contained peak concentrations of shocked quartz; melted pottery and mud bricks; diamond-like carbon; soot; iron- and silicon-rich spherules; spherules from melted plaster and melted platinum, iridium, nickel, gold, silver, zircon, chromite, and quartz. Heating experiments indicate temperatures instantly exceeded 2000 °C at a time described in the Bible. How hot is that? Enough to turn an automobile into a molten pool of iron!

Dr. Allen West of the CRG says of the findings, “Among more technical evidence, we discovered human bones that had been splattered by molten glass from the event. The glass is indistinguishable from that found at ground zero after atomic explosions. These people were killed by the heat and pressure of an atomic-like explosion but without the radiation.”

Biblical scholars have for centuries proposed other locations for the “Cities of the Plain,” ranging from Tall el-Hammam at the north end of the Dead Sea to several sites to the south, but the text of Genesis 13 clearly puts the city in the north.

The seventeen lines of evidence described and explained in this paper demonstrate that Tall el-Hammam tells the right story of how the Creator of the universe used his creation to accomplish his purpose. In this case, as summarized from Genesis 19:24-25, His purpose was to destroy Sodom and all the Cities of the Kikkar, including all the people living there and everything that grew in the ground.

For more on the Location and Destruction of Sodom: 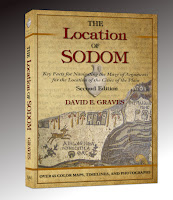 See The Location of Sodom
And "Sodom And Salt in Their Ancient Near Eastern Cultural Context Near East," Archaeological Society Bulletin 2016.
Tall el-Hammam Excavation
For Journal articles and papers see

For Books see Amazon or Amazon
For all books by Dr. David E. Graves