The Date of the Patriarchs (Sodom Debate)

I will begin this post with a great analogy that one of my late professors Dr. Roger Nicole gave in my class (1979) that always stuck with me.  It was a military analogy but brilliant. He began by reminding us that you need to always know the location of your enemy and represent their arguments accurately. Represent the argument of your opponents correctly and do not misrepresent it so that when you drop your bombs it will land on the target, otherwise they will say I am over here and you missed me (I can still hear his Swiss/French accent). This has been true for so many debates in Biblical Archaeology but perhaps no more pertinent than in the date for the Patriarchs and the debate over The location of Sodom that I have been dealing with for over 40 years.

The largest opposition I get for The Location of Sodom is the date of the Patriarchs. And the analogy of Dr. Nicole is spot on here. They drop their bombs and miss the target because we are not where they think or assume we are. They do not represent the position of their opponents accurately and so when they drop their bombs (early or late date for the Patriarch) it does not land on the enemy. I have always, since that day, made sure that I understand where my opponent is coming from and accurately understand their position so when I drop my bomb it lands on my opponent and not out in the field somewhere.

So lets consider the dates of the Patriarchs and the various positions of the debate. This is more complicated than most acknowledge and understand. So where is the targets located so you can drop your bombs on the target and not miss it so they say sorry we are over here and you missed me.

1. Fact 36: Conservative scholars debate the date of the Exodus

What is clear in this brief, and certainly not exhaustive, sampling of dates is that there is no consensus even within each camp as to the exact date of the Exodus.[13] The conservative scholar, Charles Pfeiffer, commented four decades ago with a statement, which is still relevant, that: “the evidence for the historicity of the Exodus account is decisive, but the evidence for the specific date is still inconclusive.”[14]

To further complicate the matter, conservative scholars hold to both early and late dates for the Exodus. While the early date is often categorized as the view of conservative theologians, the late date is also held by many eminent conservative biblical scholars and archaeologists[15] (see chart above).[16] James K. Hoffmeier, Professor of Near Eastern Archaeology and Old Testament at Trinity Evangelical Divinity School, states:

many conservative scholars are adherents of the so-called “early” date [1446 BC]. Unfortunately for some, this date has become a sort of litmus test for one’s evangelical orthodoxy. This is lamentable, because I believe that the 13th-century date [late date] is equally based on biblical evidence.[17]

The dates for the Exodus are calculated based on the statement in Exodus 12:40 about the 430 years of travel.[19] But when does this period begin and end? Wood follows the Masoretic text (MT),[20] while Collins follows the Septuagint (LXX) reading, which is supported by the MT patriarchal chronologies, the Samaritan Pentateuch (SP), the apostle Paul (Gal 3:16–17), and Josephus who claimed that the sojourn was 215 years in Canaan and 215 years in Egypt (Ant. 2.15.2).[21]

To state that the early date is the date mentioned in the Bible reveals one's ignorance of the way dates are calculated and the bombs drop missing their target.

The Location of Sodom page 96.

[11] Rameses II (1279-1213 BC) would be the Pharaoh of both the oppression and the Exodus. Lawrence T. Geraty, “Dates for the Exodus I Have Known,” in Out of Egypt: Israel’s Exodus Between Text and Memory, History and Imagination Conference (Qualcomm Institute, University of California, San Diego, 2013).

[18] Steven M. Ortiz, “Hermeneutical and Methodological Comments on the History of the Conquest and Settlement: The Archaeological and Biblical Support for the 13th Century,” in Southwest Regional ETS Meetings (Fort Worth, TX, 2006), 1.

Fact 35: Not all archaeologists approach biblical numbers in the same way

An issue which affects chronology is the different methods of handling biblical numbers. Wood proposes a literal chronology using base-10 hard numbers.[1] Wood states that he bases his dating scheme on “a straightforward reading of the chronological data in the Old Testament.”[2]

By contrast, Collins uses a different method of accounting for numbers, also employed by other conservative evangelical scholars,[3] where he treats the years as “formulaic/honorific” or authentic.[4] He states: “I do take the number [440] as formulaic and not literal in the arithmetic sense, and I rely on historical synchronisms to link the Exodus to Egyptian history.”[5]

Collins goes on to explain “in terms of its original cultural context. . . . Authentic may equate to literal if that’s what the writer intended.”[6]

This explains why two otherwise conservative scholars both arrive at conclusions with such a large spread between the dates of the Patriarchs.

The Location of Sodom page 114.

Fact 37: Most maximalists believe that the Patriarchs lived in the Middle Bronze Age

Most conservative evangelical scholars [D1] and maximalists would place the period of the Patriarchs (including Abraham and Lot) in the Middle Bronze Age (See Charts 2, 4, 5 and 6). This is based not so much on archaeological finds as on correlating characteristics in the biblical text with the cultural markers of the MB periods. Scholars who hold to a MB I period for the Patriarchs base their position on the literal biblical chronology based on a mid–15th cent. BC date for the Exodus, the antiquity of the biblical accounts (Gen 14), the geopolitical conditions and climate of the regions in the MB I period, nomadism and migration exemplified in the domestication of camels, and personal names and places identified in MB texts from Egypt, Ur, Mari, Ebla, Nuzi and Anatolia (20th–18th cent. BC).[1] Those who support a MB IIA/B date for the Patriarchs rely on the 13th cent. BC date for the Exodus, the presence of the Hyksos in Egypt, pottery in Negev, the Beni-Hasan mural (1890 BC), Middle kingdom Egyptian chronology, the geopolitical conditions (Gen 14), parallels with the MB culture and the price of slaves, and the structure of covenants.[2]

Collins explains some of the issues surrounding the question of chronology when he states:

While high, middle, and low ANE chronologies exist—tied principally to the chronology(ies) of Egypt—the differences between them consist of one or two decades, not centuries [See Chart 2]. (I am talking about the well-worked-out chronologies of mainline scholars like W. F. Albright, K. Kenyon, A. Ben-Tor, B. Mazar, A. Mazar, K. A. Kitchen, D. Redford, Wente and Van Siclen, J. Hoffmeier, J. Currid, and W. Dever; not the fringe, radical revisions of ANE chronology suggested by D. Rohl, G. Aardsma, and a few others.).[3]

The fact remains that most evangelical scholars believe that the Patriarchs live in the MB period (2nd millennium BC).

The Location of Sodom page 114.

[4] Recently Kris Udd wrote his dissertation on the subject and states in his abstract “Combining the new lower archaeological chronologies and the higher dates for the patriarchs indicates the possibility that Bâb edh-Dhrâʿ’ and Numeira could be two of the biblical cities of the plain.”  Udd applies two extreme views to propose this speculative hypothesis. Kris J. Udd, “Bab Edh-Dhraʿ, Numeira, and the Biblical Patriarchs: A Chronological Study” (Ph.D. diss., Andrews University, 2011).

[D1] See “A Chronology for the Cities of the Plain” and “Abraham and Tall Nimrin: Docs the Chronology Work?” in Collins. Sodom and Gomorrah, The earliest possible birth date for Abraham working from The Masoretic Text is 2166 BC. but all the chronological evidence (apart from the Masoretic version of Exodus 12:40. which I regard as problematic), would put his birth about 215 years later, if the patriarchal life spans are taken literal)). If they aren’t literal, but arc somehow “honorific attributions.” then the lime of Abraham is later still. But regardless of which “Biblical” date you assign for Abraham, he’s a resident of the Middle Bronze Age (ca. 2000-1600 BC the period from 2300-2000 BC is now included in The Intermediate Bronze Age). In Ibis light, one must note that the oft-proposed Sodom and Gomorrah sites—Bah edh-Dhra and Numeira were both destroyed about 2350 BC. long before the time of Abraham and Lot Although there’s a smaller Early Bronze Age village built after the 2350 BC destruction at Bâb edh-Dhrâʿ, it’s unfortified and short-lived. The Biblical description of Sodom requires that it be fortified (“Lot sat in the gateway of Sodom”), 72 n. 3. 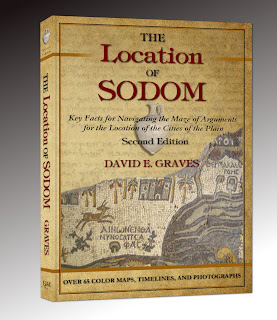 For my response to Gordon Govier's article in Christianity Today see my blog post.

List of all Books by Dr. David E. Graves

Dr. David E. Graves
Moncton, New Brunswick, Canada
(Ph.D., University of Aberdeen, Scotland) A native Canadian, Graves has been involved in teaching the Bible and archaeology for more than thirty-five years and retired Assistant Professor with Liberty University, Rawlings School of Divinity. He has taught archaeology at Oxford University, England; provided tours of the Ashmolean and British Museums; traveled extensively in the Middle East; been involved in Mount Ararat research; and consulted for National Geographic productions. He has been involved in archaeological excavations at Qumran, Temple Mount and Shiloh, Israel, as well as the Tall el-Hammam excavation project in Jordan. He was part of the team who discovered and excavated the Dead Sea Scroll cave Q12 near Qumran, Israel (Jan 2017). He is a member of the Near East Archaeological Society (NEAS). He is the author of several books on Archaeology and Biblical themes available through Amazon.com and published through his company Electronic Christian Media (ECM). He has also authored a number of journal articles on the Bible and archaeology most available through academia.edu. Email d.graves777 -at- yahoo.com. amazon.com/author/ecmdavidgraves