Battle of the Valley of Siddim Gen 14 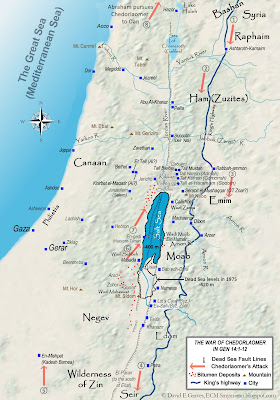 MAP Representing the fault lines and the
level of the Dead Sea in
the Middle Bronze Age (about 2000 BC).
This map also depicts the southern campaign
of Chedorlaomer, the king of Elam described in Genesis 14:1–12

During the Battle of Siddim (historically accurate in Gen 14) the location of the cities of the plain on the ESV Bible map (in the post of the top ten finds Associated with Abraham) are associated with Bab edh-Dhra (Sodom) and Numeira (Gomorrah). However these sites were destroyed 250 years apart and in the Early Bronze Age (prior to Abraham in the MB) period. Feifa and Khanazir in the south are merely cemeteries in the EB and MB periods and not occupied settlements.

A better location of the Cities of the Plain are identified by sites in the north end of the Dead Sea (Valley of Siddim [Shittim]) on the Kikkar where the Hebrew text places them. Tall al-Hammam (Abel-Shittim) is a better candidate for Sodom with the other Cities of the Plain located at sites in the MB period (tall Nimrin, Tall Kefrien, Tall Mustah and Tall Bleibel (Zebuiim is plural in Hebrew so these last two sites close together would make sense). The story of the battle of Siddim in the Jordan Valley (Kikkar) makes more sense and is archaeologically more tenable.

In this text, a confederate army of kings, representing the regions of Shinar (Babylonia, Gen 10:11),[1]  Elassar (eastern Asia Minor, i.e., Cappadocia or Hurrian) , Elamite (Sumerian, modern Iran), and Goiim (Hittites)  unite under Chedorlaomer (Kedorlaomer) to march south, no doubt on the King’s Highway (Num 20:17–21), to make war (Heb. מלחמה Josh 11:18) against the tribes of the southern Levant (See Map attached).

(1) Ashteroth-Karnaim (Tel Ashˊ-ari) in southern Syria where the Rephaim are defeated.[2]

Next, the army travels to

(2) Ham (Zuzites) between Bashan and Moab, and then on to

(6) Hazazon-Tamar (also, Ḥaṣaṣon-Tamar), which is identified with En-Gedi (also Engedi or Ein-Gedi; 2 Chron 20:2).[4]  Wenham points out that some scholars suggest that:

Ḥaṣaṣon-Tamar should be identified with Tamar in southern Judah (1 Kgs 9:18; Ezek 47:18–19). Still other possible identifications include Kasr ejuniyeh or Ain Kusb (20 miles southwest of the Dead Sea).[5] Whichever is the correct location, it is clear that from Kadesh the kings turned northwest back toward the Dead Sea region and the cities of the plain. [6]

The first question which needs to be asked is: did the battle in the Valley of Siddim, near the bitumen pits, occur at the location of the Pentapolis or at another location, some distance away from the Cities of the Plain? And why would these ancient people build their cities near dangerous bitumen pits?

The second important factor in the debate is the location of the bitumen pits. Wood suggests that the bitumen pits are in the south,  while Collins points out that this would mean that Chedorlaomer had to backtrack to go south; while if he traveled north, this would correspond better with the direction in which he was already travelling to free Lot. Abraham was at Mamre (Hebron; Gen 14:13) when he received word that Lot (Abraham’s nephew) had been taken captive, and so he pursued Chedorlaomer to Dan (Laish, identified as Tel el-Qadi).[9]  Since Chedorlaomer was travelling north to Dan, with Lot, it would make sense that Chedorlaomer would not have turned south with his armies to encounter the kings of the Pentapolis.[10]  Since there are bitumen pits at both the north and south ends of the Dead Sea, does this really help to indicate the location of the Valley of Siddim, which is associated with the Dead Sea? The heaviest concentration of sink holes (i.e., bitumen pits) are located along the western shore of the Dead Sea.

[4] Power states: “this identification is confirmed by the preservation of the name Ḥaṣaṣon in the modern Wady el-Ḥaṣaṣa about ten kilometres to the north of Engaddi (sic En-Gedi).” Power, “The Site of the Pentapolis: Part 1,” 44; J. Cunningham Geikie, The Holy Land and the Bible: A Book of Scripture Illustrations Gathered in Palestine (London: Cassell & Company, 1887), 115; Wenham, Genesis 1-15, 1:312.

[7] This is the first time that the Cities of the Plain are listed in their standard order: Sodom, Gomorrah, Admah, Zeboiim and Bela/Zoar. 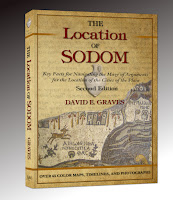 For Journal articles and papers see

Dr. David E. Graves
Moncton, New Brunswick, Canada
(Ph.D., University of Aberdeen, Scotland) A native Canadian, Graves has been involved in teaching the Bible and archaeology for more than thirty-five years and retired Assistant Professor with Liberty University, Rawlings School of Divinity. He has taught archaeology at Oxford University, England; provided tours of the Ashmolean and British Museums; traveled extensively in the Middle East; been involved in Mount Ararat research; and consulted for National Geographic productions. He has been involved in archaeological excavations at Qumran, Temple Mount and Shiloh, Israel, as well as the Tall el-Hammam excavation project in Jordan. He was part of the team who discovered and excavated the Dead Sea Scroll cave Q12 near Qumran, Israel (Jan 2017). He is a member of the Near East Archaeological Society (NEAS). He is the author of several books on Archaeology and Biblical themes available through Amazon.com and published through his company Electronic Christian Media (ECM). He has also authored a number of journal articles on the Bible and archaeology most available through academia.edu. Email d.graves777 -at- yahoo.com. amazon.com/author/ecmdavidgraves